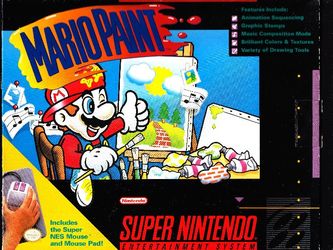 Mario Paint lets you draw, paint, animate and compose music! Creation! Imagination is your only limit with an amazing variety of drawing tools. Animation! Add exciting dimension by creating moving animation with up to 9 frame sequences. Orchestration! Compose your own songs by selecting from over 15 different musical sounds and the entire scale of notes. Coordination! Increase your Super NES Mouse dexterity by playing Gnat Attack, the clever fly swatter game included inside.