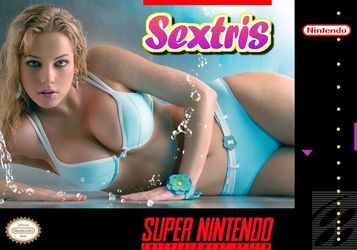 Sextris is a Columns Clone created by Twin Eagles Group in June 1997 for the Super Famicom. Once you boot up the game, a sample of a woman screaming plays. In the game you have different coloured gems. After placing 3 down, the game finishes saying CLEAR then puts up a pornographic image. Sextris has 5 pornorgraphic pictures. This game is impossible to lose, as every time you place 3 down, it changes the stage. Once on Level 19, The game stops and goes into (what looks like a) hex editor named "DBBRK Version 1.0".