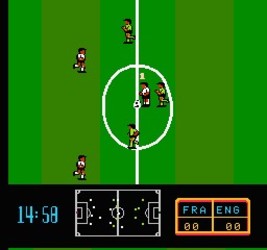 Yes it's ULTIMATE LEAGUE SOCCER with one of the highest stakes in international sport.Get into the action of Ultimate League Soccer, made up of the top players from around the world, play soccer with more power and determination than it's ever been seen in the history of the game.Now you can join these great international players as they compete in the most exciting sport ever. Choose from eight of the world's top teams. Play against the computer or take on a friend in a head to head contest of skill that will challenge you as never before.