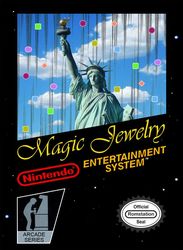 Magic Jewelry is an unlicensed game based off Columns, made in 1990 by Hwang Shinwei and published by RCM. This game is a basic rip off of Columns, where you have to get rows of three of the same coloured jewelry to clear them and get points. At the end of each level, a column of X blocks appear and whatever colour jewelry it touches, all of them that colour disappear. These also appear when you lose a game. However, it is set in New York as opposed to Egypt, with the Statue of Liberty taking up a considerable amount of the background graphics. As well as this, the stars and the moon constantly move up the screen for some strange reason, reappearing at the bottom. The background changes colour between levels and the columns move gradually faster, however much less rapidly so than in Columns. The music changes as well. Like that game, pausing won't make the blocks disappear unlike most puzzle games, making it easier to anticipate the next couple of moves.