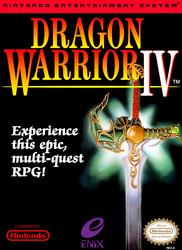 Dragon Warrior IV is the fourth game in the Dragon Quest series. The game utilizes a chapter system, where each chapter is dedicated to the personal stories of one or several main characters. The first four chapters tell the stories of the soldier Ragnar (Ryan in the original Japanese version), who sets off to investigate the disappearance of children in a nearby village; Alena, the princess of Santeem Kingdom, who dreams to become a martial artist; Cristo and Brei (Klift and Burai), a priest from the Santeem Castle and a magician who watched over the princess when she was younger; the weapon dealer Taloon (Torneko), who wants to become the best in business; and the two sisters Mara and Nara (Minea and Manya), who search for the person who murdered their father. In the fifth (and by far the longest) chapter, the Hero (or the Heroine) of the game finally appears on the stage to tie all the loose ends together and lead the party to the ultimate battle against their adversary. The rest of the game is played fairly similarly to the previous installments of the series. The party roams the top-down world in a relatively non-linear fashion, though certain events must be triggered in order to advance the story and access some of the important areas. A ship and a balloon are among the transportation methods that the heroes acquire over the course of the game. Randomly appearing enemies must be dispatched in turn-based combat, using familiar attacks and spells common to the entire series. Characters deal more or less damage depending on their position in the party lineup. They can also be swapped during battles. With the exception of the current main protagonist, the characters in the party are controlled by the AI; the player is only able to assign general tactics to them.