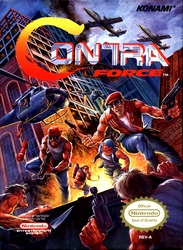 Commandos Burn, Smith, Beans and Iron are a special forces team who have seen more than their fair share of action. Neo City is their post, now that a terrorist group known as D.N.M.E. is bombarding its citizens with a typhoon of a crime wave. The C-Force has been asked to stop them, no matter what. Take command solo or team up with a comrade in 2-player mode. Even if you go it alone, you can call on a backup soldier for spot support. Tap into your special forces training to devise unique battle plans and attack patterns, select weapons, and decide which soldier's individual strengths are best suited for the dirty deeds going down. You can switch commandos whenever the situation calls for it. Endure all 5 grueling missions, swarming with traps and terrorists, that take place in a warehouse, on a battleship, at a construction site, aboard a helicopter, and at C-Force headquarters. Encounter secret passageways, hidden rooms, aerial angle views and more. Every man is a walking arsenal with heavy-duty weaponry including rocket launchers, flame throwers, bazookas, rifles, land mines and time bombs. This mission is no cakewalk, but if it was, they wouldn't have given it to you. Hit it with all you've got!