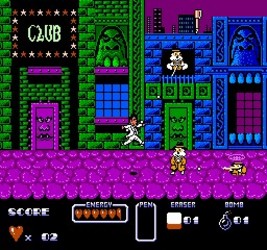 It's an imaginary world that's real. It exists in another dimension, where cartoon characters, called Doodles, are alive. It's Cool World! It was Vegas Vinnie who first discovered the tunnel connecting Cool World with this world. There, he found the Golden Spike of Power - the wedge between the two worlds. For safe keeping, he placed it on top of the Ocean Hotel in Las Vegas. Now, a knockout Doodle called Holli Would wants to take all the power the Golden Spike can give her. She wants to get herself a real body and exist in this world. If she removes it, she may destroy both worlds. She's already stolen the tunnel map and torn it into 5 pieces which she has hidden with members of her gang. As Harris, you go up against Holli and her henchmen to recover all 5 pieces and return to the real world and guard the Spike. Holli and her hoods are out to get you, so you'd better get them first if you want to save this world!