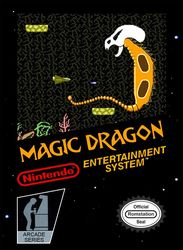 Magic Dragon is a pirated game based off R-Type, made for the Famicom in 1994 by Magicseries Corp. In general, this game is a ripoff of R-Type, a game which was never ported to the Famicom or NES. This game is considerably shorter, being only 4 stages long when compared with R-Type's 8 levels. Many of the gameplay elements are the same, with the Force powerup being present here, and the enemies and level designs are similar. The player gets 3 lives and 2 continues. The game itself is somewhat glitchy, with the HUD glitching up whenever the sprite limit is reached. The graphics and music are based off the original R-Type's, although they're considerably downgraded for this game. As well as this, the font is almost identical to Star Force's. The ending is the ship landing in a base, followed by an "End of game" message.