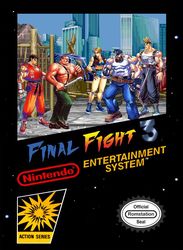 Final Fight 3 is a pirated port of the SNES game of the same name, made by Hummer Team in 1998. This is Hummer Team's last game published under J.Y. Company. This is a direct port of the SNES game. All four playable characters from the original game are present, as are most of the enemies, bosses and rounds. However, the weaker enemies appear throughout the whole game. The game is considered to be easier than the SNES game, with fewer enemies appearing on screen at any given time to prevent sprite flicker. There is only one route in this game, unlike the original. To mantain the aspect ratio, the playing field was made smaller by placing a black bar at the top of the screen with the players' score and data, and a bar at the bottom of the screen stating the current round and showing the Final Fight 3 logo was also added. The cutscenes are taken from the respective stories, with slight typos and all of the punctuation removed for unknown reasons. It is also difficult to tell who is speaking because the text is all rendered in white in this game. The text was mostly copied from the English version of FF3. Unlike most Hummer Team games, the ending is not a simple "The End" screen. Instead, it opts to copy Dean's ending from the SNES game, taking and simplifying its graphics, while the music and sound effects were stolen from Mighty Final Fight.