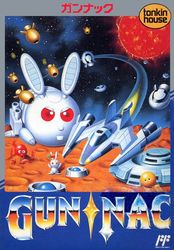 A Galactic Federation starfighter is sent off to destroy an alien armada (led by giant robotic rabbits this time around -- an unusually whimsical theme in keeping with the contemporary Parodius) threatening to collapse your system's sun into a supernova. Gun-Nac is a top down shooter in which the player controls the Federation starfighter. Power ups and genre mechanics are as could be expected from a "shmup". now with collectible money that allows you to shop for different weapons and bombs to complement your standard main gun in the inter-level weapons market. Directional weapons, attachments and up to four bomb types can also be bought to increase your survival chances, further aided by player control over the speed at which your ship moves through the levels. Single player only.