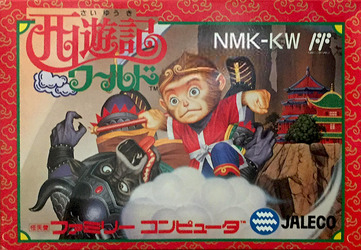 An adaption of Wonder Boy in Monster Land for the Famicom. This version of that game now has its setting influenced by the Journey to the West novel. Players take on the role of Sun Wukong (Goku in Japanese), who has to free captured monks so they can be able to travel from China all the way to India in order to receive the word of Buddha and bring it to the Chinese people. Saiyuki World features eleven side-scrolling stages, Goku can jump and he can equip a dagger to stab enemies. Defeated enemies leave behind money which can be spent in the various stores found throughout the stages. Purchasable items include things like a shield, body armor, and footwear. At the end of each stage is a boss that must be defeated in order to free a monk.