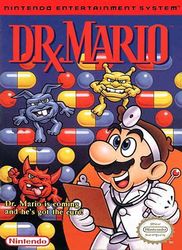 It's Dr. Mario for an intense new challenge! Mario throws multi-colored vitamin capsules into a bottle that contains an ugly variety of nasty viruses. You can move, shift or spin capsules as they fall. Arrange them to align with other capsules on top of the virus. If you can get four or more of the same color in a row, POOF! They disappear! Destroy all of the viruses in the bottle and you progress to the next round where things get even more difficult!