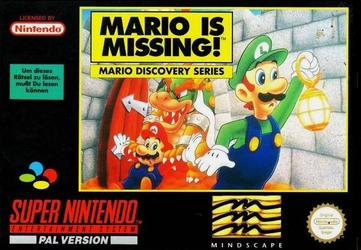 Don't look now, but Bowser's back, and this time he's in your world! But where is that mastermind of reptilian trouble doing his dastardly deeds? And what has he done with Mario?? Welcome to Mario is Missing! Take a trek with your travel agent, Luigi, and see the world! Track down troublesome turtles. Figure out where in the world you are, and what on earth happened to Mario. If your grasp of georgraphy is good enough, you'll get the goods, stomp the hoods, and grab Mario out of Bowser's ghastly guest house. A learning adventure that the whole family can share. This is no Koopa stomping mayhem. It's a fun way to learn about our world.