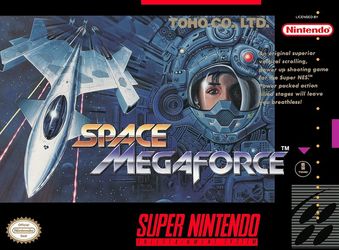 "Space Megaforce". The game's thrilling speed is its most attractive feature. The enemy movements are fast. Your shots and the enemies' shots are fast. Finally, the scrolling is fast. The screen filled with battle action just overflows with high speed shooting excitement. On top of that there is the Shot Control System operated wiith the "R" button. You can attack the enemy in a multitude of ways with a weapon using this system. Naturally, the features of the Super NES such as rotation, enlarging, and shrinking functions are used to their fullest and huge enemies never before possible are packed into this exciting MEGA game!