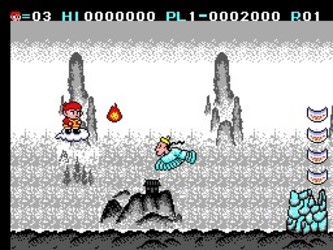 Enter the wild, fun-filled world of Mike Chen. He's out to learn the secrets of the five lands so he can become a powerful wizard of the skies! Already he has tamed a cloud to carry him around. He has learned the art of the shooting Ki force from his fingertips! but standing against him are more wacky, zany creatures than you can shake your chopsticks at! Bird men. Flying cat heads. Pigs with guns. And flying bowls of soup! Sounds funny...but remember that each can zap you with a touch! You do have a couple of tricks up your sleeve. Collect power-up pots to fly faster and make your Ki force even more powerful! Defeat the mid-round bosses and you will earn the use of true magic...fireballs, guardian flames and bouncing bombs. Defeat the five world guardians and you'll become a Cloud Master! Fail, and you'll be locked in combat forever. Are you really going to let a flying dumpling get the best of you?