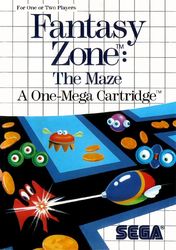 Sega decided to make their last game in the Fantasy Zone series different. You see, the gameplay now involves you going around mazes, collecting all the dots while avoiding enemies. You are awarded points for each dot collected, but they vary depending on their size. For example, small dots award ten points each, while you get 200 points for each larger dot you collect. Once you have collected all the dots in the maze, the enemies will turn into coins, which you must quickly get in a strict time limit and you move on to the next maze. Just before this, though, you get a statistics screen that shows the amount of time that you spent in the maze. Points are also awarded, but sadly, if you spent over sixty seconds in a maze, you won't get any. Every world you travel to consist of three mazes, and after you complete all three, a bonus round appears where the object is to collect all coins before time expires. While you are collecting the dots in the normal mazes, you must touch the enemy's energy, a flashing red spot within each maze to avoid 2nd-generation enemies from entering the mazes. Some power-ups can be collected, which consist of weapons and speed boosters (big wings), which can be collected by landing on the circle which it is in. However, you need money in form of the amount outlined just before each maze. If you land on a circle while you are short of cash, a 'NO SELLING' sign will appear above it, and you have to collect some more dots and try again. Also you can die by touching an enemy. When you die, a coin will take you place, and when you get resurrected, you can grab the coin. The game can be played with two players, but the same rule applies in a 2-player game.