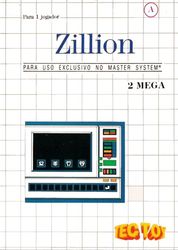 The White Knights, a peacekeeping force of the Planetary System, have a mission: prevent the evil Norsa Empire from dominating the world. The Norsa base on Planet X must be destroyed: an operative named JJ is sent to infiltrate it and collect the five floppy disks that will enable him to input the self-destruct sequence into the base's mainframe computer. However, beside completing this main objective, JJ also has to find a way to rescue his friends, Apple and Champ. Based on the anime of the same name, Zillion is a platformer with an emphasis on exploration and problem-solving rather than on fast-paced "jump and run" gameplay. The game is set almost entirely in the underground base. Capsules containing key codes and power-ups are scattered around the vast environments. Common obstacles include enemy guards, tripwires, laser turrets, and force fields. Rooms must be unlocked by using computer ID cards and inputting the correct four-digit code. Specific actions such as turning off barriers, deactivating traps, etc., are sometimes required as well. JJ uses a gun similar to the Sega Master System Light Phaser to defend himself and blast open the capsules. Upgrades for health, speed, jumping ability, and gun power can be found; Opa Opa, a character from Fantasy Zone games, provides character enhancements. Once Apple or Champ are rescued, they can be controlled by the player, with the ability to switch between the three heroes. Each of these characters has his/her own strengths and weaknesses; Apple is physically weaker, but is able to jump higher, while Champ is stronger, but slower.