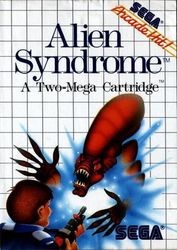 A mysterious alien space fleet has invaded human occupied space. Called the Alien Syndrome?, they are the deadliest creatures mankind has ever encountered. The Alien Syndrome shoots first...and asks no questions! A battalion of your friends attacks the alien fleet. But they are captured and held hostage. Earth Command sends one soldier to get them back...You! You're RICKY, Earth Command Trooper. When it comes to deep space combat, you are the best. Armed only with a combat rifle, you must infiltrate each alien ship rescue the hostages and escape...before a time bomb vaporizes the ship into cosmic debris. The odds...and the clock...are against you. The aliens can appear anywhere...at any time. So shoot fast and straight. The hostages are depending on you!