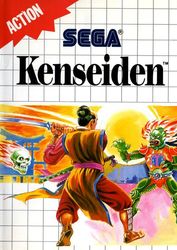 It was a land of peace and plenty... until the evil Warlocks returned in a storm of ruin and destruction! Now, they have struck the final blow by stealing your heritage... the Sword of the Dragon King and the Five Secret Scrolls. You are Hayato. The blood of the Dragon King runs in your veins. Armed only with a samurai sword, you must travel through the 16 provinces of ancient Japan, battling the Warlocks and their monstrous armies in nightmare caves and castles! If you defeat the Warlocks, you will learn the sword magic of the scrolls and... maybe... regain the Sword of the Dragon King. Fail, and your country is doomed to a thousand centuries of terror! It is a battle only you can win!