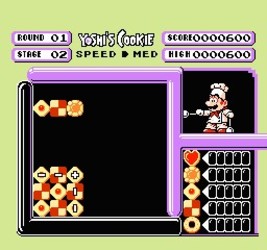 Cookie chaos for Mario and Yoshi! Mario and Yoshi are filling in at the Cookie Factory and they need your help! Fresh baked cookies roll out of the ovens. It's up to Mario to sort and stack 'em before they pile too high! Line up a row of the same kind of cookies either vertically or horizontally, and they vanish! Clear the screens to move on to a new level of cookie chaos. Yoshi appears from time to time to stir things up. Play for a high score or head-to-head against a friend. The mouth-watering madness doesn't let up! And be sure to keep some cookies close by, 'cause you'll get the munchies during this lip-smacking good time!