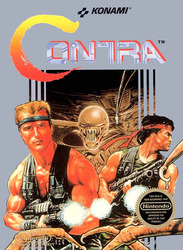 The universe teeters on the brink of total annihilation at the hands of the vile alien warmonger, Red Falcon. Earth's only hope rests with you, a courageous member of the Special Forces elite commando squad. Your mission: Battle deep into the deadly Amazon jungle, where the Red Falcon and his galactic henchmen have transformed ancient Mayan temples into awesome monuments dedicated to mass destruction. A multitude of weapons, from rapid-fire machine guns to high-tech lasers are at your disposal as you sweat blood, fighting past 3-D mazes, underground security systems, and tropical forests surrounded by giant waterfalls and alien cannons. This is the ultimate test for the ultimate guerilla warrior. And if you survive, Earth survives!