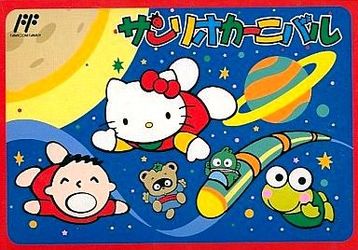 Sanrio Carnival is one of those block drop games that are a lot like Columns, where you drop 1x2 blocks that are combos of 6 possible squares. Line up 3 in a row of any one block, and they vanish. However, it is interesting because it has some quest stages where you need to go for specific combinations or even 4 or 5 in a row. There are chains(1 combo before another) and x-folds(several combos at once.) The NES version has several advantages over the GB version. First, the play field is 7x12 and not 6x8, leaving more room for silly errors. Second, the piece you rotate around is highlighted, letting you concentrate even more on the board below. Third, the controls don't stink, so you can push the piece where you want it more easily. Finally, there are a few more levels, challenges and ideas. There's also a stats meter saying how many of what piece dropped, but that is not a functional improvement.