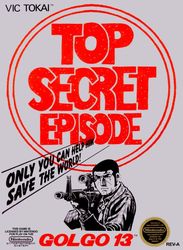 Golgo 13: Top Secret Episode Gorugo Satin Dai-Issho Kamigami no Tasogare, Golgo 13 Episode 1: Twilight of the Gods) is an action game for the NES developed by Vic Tokai and released in 1988. In this game, based on a popular Japanese manga, the player takes on the role of Golgo 13 (also known as Duke Togo), an assassin whose objective is to destroy the leader of the Drek group. On the way, Golgo 13 must pass through several areas, including East Berlin, Athens, Rio de Janeiro, and Alexander Island (located off the coast of Antarctica). The game contains both side-scrolling and first-person shooter segments. It is necessary to navigate and shoot through several mazes in a first-person view in order to proceed through the game, but one maze is a fake base with no way out. The mazes account for a large amount of the frustration players encounter with this game. The instruction manual contains maps for the mazes. At the time, Nintendo of America had strict censorship policies concerning what sort of content could be depicted or referenced in any game published for a Nintendo system. In the original Japanese version, the DREK "empire" is actually the resurrected Nazi regime, but this was changed so as to fit the prohibition against political advocacy, racial and or ethnic stereotyping. Yet, some of the changes were more complete than others. The final boss, Smirk, is clearly a cyborg version of Adolf Hitler and a file retrieved by Togo during a base infiltration in Greece retains a swastika on it, which is visible in the player's inventory area. Nintendo required that Golgo had his profession changed to spy rather than assassin, per its prohibition on graphic violence and gore. One of the most challenging aspects of the game is that these acts are intended to be played out as though they were a limited number of episodes in a television series, or perhaps as issues in a limited series comic book since the game's title character originates in Japanese manga. The game only lasts fifty-two episodes, meaning the player only gets fifty-two chances to beat the game. Episodes begin at one and are counted upward from the start screen each time the player loses a life. At the end of the fifty-second episode the game resets and begins again from the main title screen. In video game jargon, this is to say that the player has a maximum of fifty-two "lives" to complete all thirteen acts before the game resets.