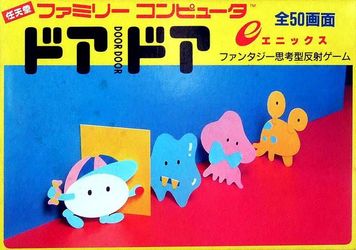 In DoorDoor, players take on the role of Chun. Chun's goal is to trap four different enemy alien types behind doors. DoorDoor is a platform game in which Chun has to lock up the alien creatures that pursue him. Chun can attempt to lock as many aliens as he can behind each door that is available on a particular stage. Chun can slide open a door, wait for the alien(s) to enter and then he has to quickly shut the door, because if he waits to long the captured aliens will walk out and pursue him again. Each stage is completed when all the enemy aliens are trapped behind doors.