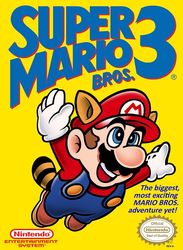 New, different worlds! New exciting levels! New challenges galore! Fight monsters and mini-bosses, avoid ghosts and the burning sun. Make your way through water and quicksand. Dodge cannonballs and bullets and rescue the King's Wand! In Super Mario Bros. 3, there are more warps, more chances at extra lives, and new special suits! The Raccoon Suit lets you fly and knock out blocks. The Frog Suit helps you out-swim deadly fish. There are suits for every occasion! Store up flowers and mushrooms to use later on. Play game-show type bonus rounds! Go back to that last screen and get a mushroom! Pause to take a break, then continue where you left off! Super Mario Bros. 3 is fun to play alone, or team up with a buddy to prolong the adventure!